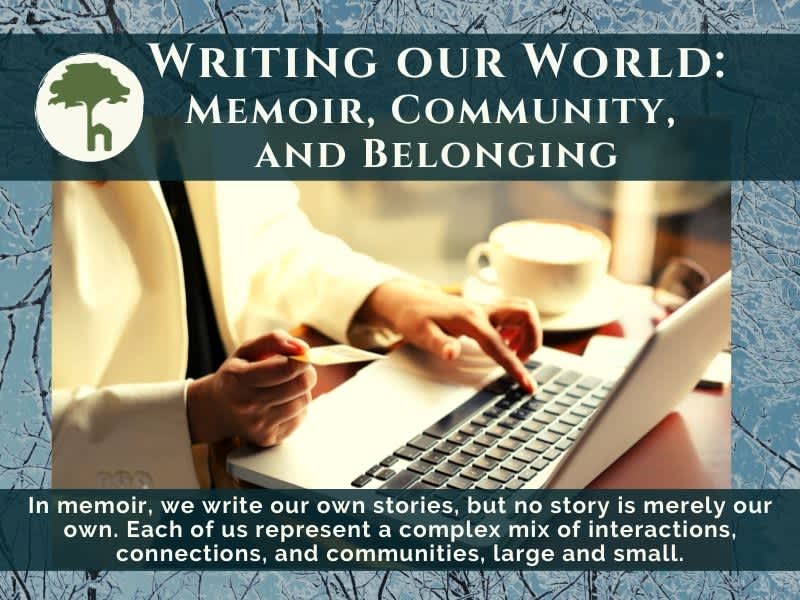 In memoir, we write our own stories, but no story is merely our own. Each of us represent a complex mix of interactions, connections, and communities, large and small. We are in part a result of the conditions of our world, and in memoir, we examine, expose, and shine light on these conditions by virtue of writing our own stories and considering more deeply our interdependence and connectivity.  This class is for new and experienced writers, or even those wanting to try out self-expression for the first time. We will learn from master texts and authors, and along the way, truly examine what it means to be a part of our world.  Co-facilitated by Laura Jones and Anne-Marie Akin.

Laura Jones had a deep epiphany reading Truman Capote one bored hot summer, lazing on the couch.  She was just a kid, but she realized he also heard the same fine music of words rolling around in her head.  Since then, she’s devoted her life to working in the arts.  As a nonfiction writer and journalist, she widely published essays, memoir, articles, and reviews, in well-known literary magazines such as Creative Nonfiction and Fourth Genre, to name just two, and wrote seven fiction books in between.  Before that, she enjoyed a career making film and television with PBS and Disney.  She was one of the founding producers behind the tentpole documentary series, Art21, which introduced contemporary art to a generation of Americans.  Her own documentary The Dance Space Story ran for a decade on public television, and her full-length screenplay Creative Nonfiction won a staged reading in Chicago.  She holds two graduate degrees, including an MFA in writing from Northwestern University and an MA in interdisciplinary work from New York University.  As an undergrad, she was a Tisch School of the Arts University Scholar and traveled nationally and internationally meeting dancers, artists, playwrights, and actors, and in general, soaking up all the great culture of the last three decades.  As an educator, she shares her love of art and creativity with everyone she meets.

Springhouse invests in its adult programs by providing:

At Springhouse, we believe education should not be a commodity and we strive to make sure that nobody is turned away for financial reasons. In our economic model, instead of tuition or program fees, we see your contribution as an investment in our vision and mission.

To make an informed investment for this program, visit our economic model page where you will find transparent information about what resources Springhouse needs to fulfill our mission. We invite you to consider: